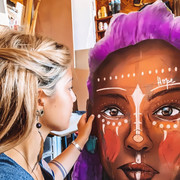 Constança aka c'marie (b.1992) is a portuguese visual artist.

She wanted to be a biologist, astronaut and neurosurgeon, broke her head four times (until she was 5!) and constantly asked her mother when she had to go to the doctor to get vaccines. She draws as long as she can remember, with a special affection for paper towels in restaurants. The mother still has these treasures.

c'marie is a kind of free spirit, almost independent, that captures the essence of expressions and gestures, trying to give shape to her own voice. She uses different media to express herself, alternating between sculpture, drawing, watercolor and acrylic painting, mural painting and more recently, digital painting.When asked about the nature of her drawings, she says that she sees them as an introspection, a sensitive but awake and conscious state - as when no one looks at us, when we are seated on the subway bench, lost in ourselves, in our distant ramblings - then our naked selves, more raw, sincere and real, flourish.